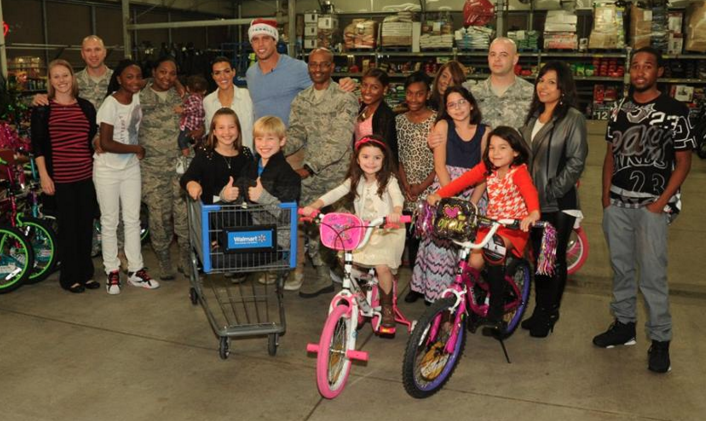 Editor’s Note: The NFLPA Community MVP recognizes players who are making a positive impact in their local communities. Each week, the NFLPA celebrates one player who recently demonstrated his commitment to giving back and will make a donation to the player’s foundation or cause in support. This week’s #CommunityMVP is Houston Texans linebacker Brian Cushing whose family history has inspired him to make a difference in the lives of those who serve.

On December 15, Brian Cushing helped six special families get in the holiday spirit.

The Houston Texans linebacker played host to veterans from the Military and Family Readiness Center, treating them and their families to dinner at Del Frisco’s.

“We loved having an intimate event with members of our military,” said Cushing. “It was such an honor for us to spend time with such great people and really special to meet their families.”

The event was part of Operation Holiday Hope, a community outreach program of the Brian Cushing Foundation. The organization was founded by Cushing and his wife Megan to serve and honor the men and women of the armed forces by providing resources and experiences to Houston-area veterans and their families.

But dessert at Del Frisco’s wasn’t the end to the evening. After the meal, Cushing surprised the attendees and treated each family member to a $250 shopping spree at Walmart and a turkey from Guy’s Meat Market.

“Christmas shopping was by far our favorite part because they were so grateful for their gifts,” Cushing said. “It was so fun to see that.”

A Cause Close to His Heart

Cushing, who grew up in a family characterized by military service and impacted by war, said he understands the effect military life can have on a family. His father was an intelligence officer during the Vietnam War. His mother was born in a Nazi forced labor camp in Germany.

With this in mind, his foundation specifically seeks to help those which have been affected by loss, deployment or relocation.

“We love being able to help the heroes in our country that have dedicated their lives for our safety,” Cushing said.

On the field, the Pro Bowl linebacker has racked up numerous accolades, including the Texans’ MVP award in 2011, but he insists that his legacy in Houston must go beyond that. The Brian Cushing Foundation wants to impact the lives of more than 30,000 people by the end of its second year, 2016, and he is well on pace to accomplish that goal.

On October 26, Cushing rounded up his Texans teammates to serve as celebrity waiters at an event that benefitted his foundation. Held at The Palm in Houston, it was the organization’s first official big fundraising event.

Since 2014, he has hosted a free football camp for military kids in Pearland, Texas. The clinic teaches youth the finer points of football and sends them home with prizes thanks to support from Kroger and Procter & Gamble.

The foundation has also mapped out Cushing’s Camp, which will provide special, all-expense paid trips for military and veteran families so they can spend quality time together.

“Our next major event will be in January when we begin the development of Cushing’s Corner at Michael E. DeBakey Veterans Affairs Medical Center,” Cushing explained. “This will be an area for families of veterans receiving treatment at the hospital. We hope it provides a space for them to relax and enjoy themselves in the many hours they spend there.”

While his foundation only officially launched this year, Cushing has long supported a variety of charitable causes, especially those of his teammates. In addition to his own youth football camp, which will be hosted for the third year in 2016, he has participated in all three of J.J. Watt’s famed Charity Classic softball tournaments. He’s also served as a celebrity waiter for Arian Foster’s foundation’s fundraiser and showed off his bowling skills to support Chester Pitts’ charity.