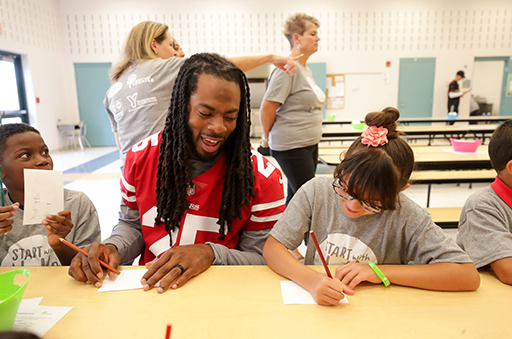 “It’s truly an honor to be named NFLPA Community MVP,” Sherman said. “I was excited to help give these kids an opportunity to do something really special. We wanted to reward them for their hard work and dedication, and their excellence in academics.”

After seeing a tweet on Monday about the Hub City 6U, a Compton Pop Warner football team trying to raise money to attend the National Youth Championship in Florida, Sherman sprang into action. The nine-year NFL veteran personally donated $5,000 and promoted the team’s GoFundMe page to his more than two million social media followers. Overnight, the team surpassed their fundraising goal, generating more than $30,000 that will cover the travel, lodging, food and other trip expenses for the team of 20 kindergarteners and first-graders.

Sherman, who also grew up in Compton, was impressed not only by Hub City 6U’s on-field success but also by their dedication to good habits off the field. The team operates under a policy that all players must maintain a 3.1 grade point average in order to compete.

“It’s important to motivate them and make sure they understand that academics is a huge part of life and success moving forward,” Sherman said. “I didn’t want finances to be the reason they didn’t get a reward for all their hard work and dedication.”

The NFLPA Executive Committee member was also active in his former team state of Washington this past week. Through their Blanket Coverage Foundation, Sherman and his wife, Ashley, donated items to three food banks in the Seattle and Tacoma areas after hearing that their shelves were almost empty – just in time for Thanksgiving.

“When we heard the food bank was experiencing a food shortage, we knew we had to step in and do something,” Sherman said. “It has been incredible to see how our donation has sparked a big movement and has driven others to donate as well.  No child should ever go hungry.”

Since launching Blanket Coverage, the Richard Sherman Family Foundation, in 2013, he and his wife have raised more than $1.5 million and helped more than 70,000 people in carrying out their mission of providing students in low-income communities with school supplies and clothing so they can more adequately achieve their goals.

The couple regularly visits the Santa Clara County Juvenile Hall to connect with and encourage the kids there. Last month, Blanket Coverage donated more than $20,000 to the Tacoma School District to relieve the lunch debt of students who are receiving free or reduced lunch. And in seven-plus years of annual backpack, homeless care kit and holiday giveaways, the Shermans’ foundation has:

In honor of Sherman being named this week’s Community MVP, the NFLPA will make a $10,000 contribution to the Blanket Coverage Foundation. Also, our supporting partner Pledge It has set up a crowdfunding campaign called “Richard Sherman Defending Dreams” to support Blanket Coverage.Supporters can pledge contributions for every pass defended by Sherman this season, or they can make a flat donation:

Sherman, along with the other 2019 Community MVPs, will become eligible for this year’s Alan Page Community Award, which is the highest honor that the NFLPA can bestow upon a player.

The NFLPA Community MVP program recognizes NFL players who are making a positive impact in their local communities. Each week during the regular season, the NFLPA will celebrate one NFL player who has demonstrated a commitment to giving back to his community. Please visit nflpa.com/community-mvp to read more about the program.