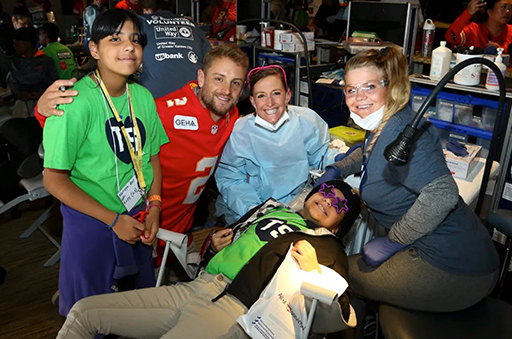 On October 22, thanks to the efforts of Colquitt and TeamSmile, dozens of local dental professionals descended upon the Chiefs team facility and volunteered their services to children who otherwise wouldn’t be able to afford oral care. From simple cleanings to complex procedures, more than $200,000 worth of dental work was performed at no cost to those in attendance.

Along with games and live music, children who received treatment were also visited by 11 of Colquitt’s Chiefs teammates, including Anthony Hitchens, Chris Jones and Week 0 Community MVP Derrick Nnadi. To ease some of the patients’ nerves, the players even got in the dentist’s chair for a cleaning, bringing smiles to everyone in attendance.

“TeamSmile knows in thirty minutes, we can change a child’s trajectory in life,” Colquitt said. “A lot of these children come in not smiling and are nervous. But after being seen by our volunteer dentists and hygienists, and getting much-needed dental work, their lives have been impacted. Afterwards, you will see them smiling and acting totally different on TeamSmile’s dance floor because this program has given them the confidence to smile.”

Colquitt co-founded TeamSmile with Dr. Bill Busch in 2007 after they heard of a Maryland child who tragically passed away from not having an infected baby tooth extracted. Since then, TeamSmile has grown to partner with 44 professional sports clubs in the NFL, MLB, MLS and NBA, resulting in more than $2 million in free dental care to nearly 5,500 children as of 2018. By the end of this year, 34 more team programs will have taken place across the country.

During his 15 seasons in the league, the Chiefs’ longest-tenured playerhas also been active in other community projects. Earlier this year, Colquitt joined the recovery efforts in the Bahamas and Texas following a devastating rainstorm and hurricane season. To aid with the rebuild, they helped provide water filters capable of cleaning 42,000 gallons of water a day along with other necessary supplies.

In honor of Colquitt being named this week’s Community MVP, the NFLPA will make a $10,000 contribution to a foundation or charity of his choice. Also, our supporting partner Pledge It has set up a crowdfunding campaign to benefit TeamSmile. Supporters can pledge contributions based on every punt inside the 20-yard line by Colquitt, or they can make a flat donation at the following website: pledgeit.org/puntingforsmiles. Colquitt is also personally pledging $500 for every punt of his that lands inside the 20-yard line this season.

Colquitt, along with the other 2019 Community MVPs, will become eligible for this year’s Alan Page Community Award, which is the highest honor that the NFLPA can bestow upon a player.

The NFLPA Community MVP program recognizes NFL players who are making a positive impact in their local communities. Each week during the regular season, the NFLPA will celebrate one NFL player who has demonstrated a commitment to giving back to his community. Please visit nflpa.com/community-mvp to read more about the program.