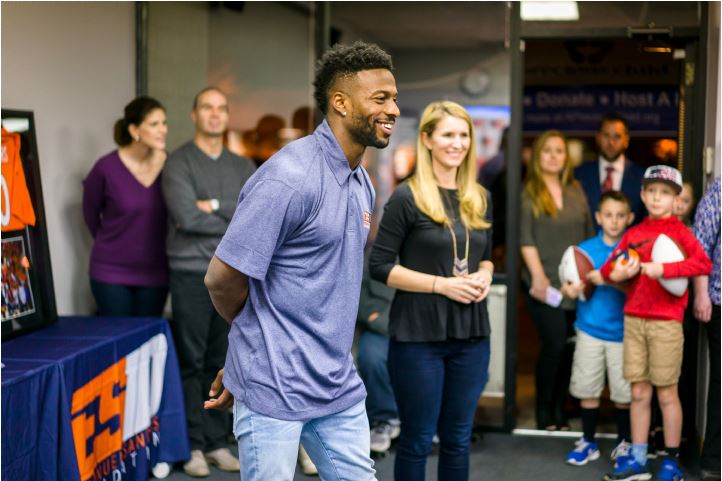 “I am honored and grateful to be named this week’s NFLPA Community MVP,” Sanders said. “As a community we have to stick together. At the end of the day, there’s a lot of people that are in need. I grew up in a disadvantaged family and I had people that I depended on, and now I have this platform. I’ve always said that when the time comes, I’m going to make the most of it. And that’s what I’m doing now.”

Thanks to the efforts of the Broncos wide receiver and New Era, six different Lids store locations in Greater Denver are collecting items between November 22 and December 6 to deliver to A Precious Child so that hundreds of children will be able to have warm winter clothing and a present to open for Christmas. The holiday collection is an extension of Sanders’ Gear Up program in which his foundation provides financially disadvantaged kids in Denver with sporting equipment in addition to funding their sporting fees.

The mission behind Emmanuel Sanders Foundation, which works to provide resources for families in need, stems from the trials he faced growing up in Texas. Raised by his grandmother in her double-wide trailer, where he slept on the floor among four generations of relatives, Sanders often went to bed hungry while listening to rats run through the walls. Thanks to his grandmother’s efforts and unique football skills, Sanders was able to become the first person in his family to attend college, paving the way for his current NFL career and platform to give back.

Earlier this year, Sanders poured back into his hometown community in the aftermath of Hurricane Harvey. The two-time Pro Bowler raised $82,500, including his own $25,000 donation, to support the relief efforts in Houston. He also partnered with Randalls grocery store to provide water, diapers and food pantry items as well as tools for first responders.

Sanders followed that up last month by launching his inaugural Gear Up program, where he met with 10 local children and personally provided them with sports equipment.

“It has been humbling to see what my foundation has been able to accomplish so far for the Denver community,” Sanders said. “This is just the beginning for great things to come from the Emmanuel Sanders Foundation, as there are many more deserving people that I want to help and inspire in our community. I am committed to making a lasting impact through my foundation and I am thankful for everyone that has played a role in supporting the foundation.”

In honor of Sanders being named this week’s Community MVP, the NFLPA will make a $10,000 contribution to his foundation or charity of choice along with an in-kind donation to him on behalf of our supporting partner Delta Private Jets. Sanders, along with the other 2017 Community MVPs, will also become eligible for this year’s Byron Whizzer White Award, which is the highest honor that the NFLPA can bestow upon a player.