Editor’s Note: The NFLPA Community MVP recognizes players who are making a positive impact in their local communities. Each week, the NFLPA will celebrate one player who recently demonstrated his commitment to giving back to his community, and will make a donation to the player’s foundation or cause in support. This week’s #CommunityMVP is New York Jets tight end Jeff Cumberland for his toy drive and holiday party event at the Driving Park Recreation Center in his hometown of Columbus, Ohio.

New York Jets starting tight end Jeff Cumberland has had a busy week both on and off the football field. This past Sunday, Cumberland scored a big touchdown against the New England Patriots, contributing to a near-upset. But it was two events that Cumberland hosted earlier in the week that had the biggest impact.

Last Monday and Saturday, Cumberland hosted events in New York and his hometown community of Columbus, Ohio, respectively, that brightened the holidays of numerous children.

As part of the Jeff Cumberland Foundation, Cumberland works with children and those in need year round. His charitable nature was inspired by his grandmother, the woman who raised him and taught him the values that he holds dearly today. She taught him the importance of using life’s obstacles as preparation; it is a lesson he stresses to his own young daughter.

“My daughter is my world and my everything!” Cumberland told NFLPA.com. “She is such a blessing to my life and keeps me grounded. Everything I do is for her. My goal is to have every young kid in Columbus and my neighborhood to grow up, have a job, and be a bright spot for their family.”

On Saturday, Cumberland hosted his annual toy drive and holiday party at the Driving Park Recreation Center in Columbus. It is one of the biggest events held by his Jeff Cumberland Foundation, and it helps provide a better holiday for youth aged 12 and younger.

“It is basically a holiday party for the kids in the community including pizza, Insomnia cookies, toys, playing games, and face painting,” Cumberland said. “My family and friends all work together to put this event on by buying toys and then distributing them to the kids from the neighborhood and community.”

More than 250 local children attended the event, and each walked out with new toys and a full stomach.

“It means so much to me when they are smiling, laughing and walking out with a toy that they would have never had,” Cumberland said. 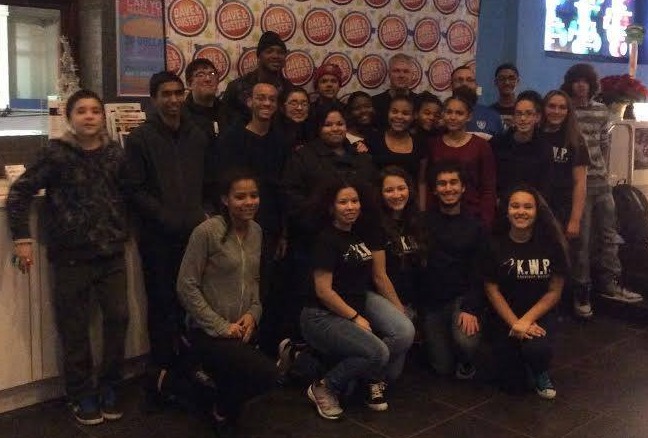 “Ever since I got to New York, I’ve been working with the different Boys and Girls Clubs in the area, because growing up, I was raised by my grandmother and can relate to many of those kids,” Cumberland said. “The best part of the event at Dave and Busters on Monday was seeing all the smiles on the kids’ faces when I walked in.”

Cumberland says many of the children lack the traditional family structure that he also was unable to experience in his childhood. His NFL platform allows him to serve as a role model for these children and teenagers, and he relishes the opportunity to utilize that platform to change lives and bring some holiday cheer to many communities.

“I’m truly blessed to be in the position that I am right now,” he said.

Cumberland spent that Monday evening eating food and playing games with the kids. He was especially excited to challenge them to pop-a-shot, a game that Cumberland says reminds him of the good times of his youth. He also brought gifts for all the children and posed for pictures, adding to an already special evening for those in attendance.

Earlier in the year, the Jeff Cumberland Foundation held a turkey giveaway in Columbus, an event they hold annually. The event is important to Cumberland, as many in the community cannot afford to have a healthy holiday meal on their own.

The other major annual event hosted by his foundation, The Gridiron Youth Football clinic, occurs every summer in Columbus. It helps young athletes improve their skills and understanding of football. Cumberland is always joined by a number of his teammates for the free clinic. The campers go through drills and listen to a series of guest speakers. The day ends with a photo and autograph session with the players.

“It is great to see so many young athletes wanting to play the sport and stay active,” he said.

When he isn’t hosting events with his own foundation, Cumberland makes a point to support teammates in their own charitable events, participating and contributing wherever he can. But Cumberland has stayed true to his hometown community of Columbus, while embracing his adopted New York community. It is an impressive balance that speaks to his dedication to improving his communities by reaching young people.