Editor’s Note: The NFLPA Community MVP recognizes players who are making a positive impact in their local communities. Each week, the NFLPA will celebrate one player who recently demonstrated his commitment to giving back to his community, and will make a donation to the player’s foundation in support. This week’s #CommunityMVP is Detroit Lions safety Glover Quin, who held an event last week to benefit The Ms. Molly Foundation, an organization that funds safe houses and shelters for domestic violence victims. It is one of the many community organizations that he partners with and supports.

As an NFL player, opportunities for free time during a demanding regular season are difficult to come by. Other than a typical day off on Tuesday, most days are meticulously regimented. Players are constantly juggling film sessions, practices, workouts and meetings, while still finding time for themselves and their families.

Despite the many demands, most NFL players are able to set some time aside for various charitable causes and foundations. Still, it takes a special blend of passion and commitment to carve out the time necessary to make a lasting difference for one cause, nevertheless two or three. Glover Quin, starting free safety for the Detroit Lions, is unique in this regard.

Quin works with multiple organizations championing a number of different causes. They are organizations that are close to his heart. Most importantly, he possesses the dedication and genuine compassion that is necessary to make a tangible and lasting difference. With Quin, there is no risk of spreading himself to thin.

“I just try to balance it all and put it in perspective,” Quin told NFLPA.com. “I try to schedule most of my events on Tuesdays and keep that day to get involved with the community. When it's time for me to spend time with my family, I do that and make sure to give them all of my attention when I'm with them.  You don't have a lot of time to just sit around.  I like to dedicate my free time to doing something.”

Quin’s most recent event occurred this past Tuesday to benefit The Ms. Molly Foundation, a non-profit organization that funds safe houses and shelters for domestic violence victims.

“It is important for me as a husband and father to participate in an event like this,” said Quin.

The event took place at the Mongolian Grill in Ann Arbor, MI. and featured Quin as the evenings “Guest Griller” celebrity chef, where he prepared food for the guests. In addition to the meal, attendees were able to meet Quin for pictures and autographs.

“They were very excited to see a male, NFL player take the time and effort to shake their hands and be a part of it,” Quin said. “They were very receptive to it.”

“I do plan on going back, visiting the SafeHouse Center and doing some more events with them in the future,” Quin said. He discussed bringing his teammates along to read to the children there and help with chores. 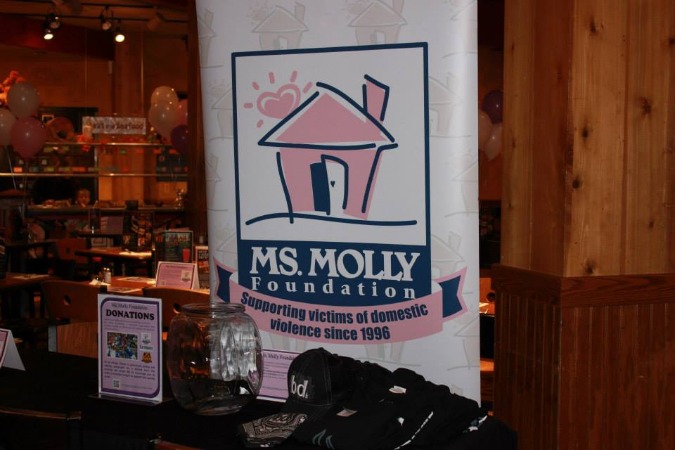 Quin’s partnership with The Ms. Molly Foundation is a new addition to his already inspiring charitable portfolio. In 2013, Quin partnered with Soles4Souls, an organization dedicated to fighting poverty by collecting new and used shoes.

“I love shoes and clothes. I have a ton,” Quin said, laughing. “I was thinking, I have a lot, but I got to thinking about all those that can't afford all of this.  Why just sit there and have so much without being able to give to someone in need here and all over the world, and help encourage other people to give what they can to help out.”

Quin turned his passion for shoes into an opportunity to help others when he hosted his first shoe drive last year. He collected over 250 shoes. This year, he again partnered with Soles4Souls for a second shoe drive at a local Dick’s Sporting Goods.

During the week of Thanksgiving, Quin will join with the Clothes4Souls initiative, a sub-division of Soles4Souls, to help distribute over 2,000 coats to Detroit citizens in need. One of the featured distribution points is The Ms. Molly Foundation’s SafeHouse Center, an awesome example of Quin tying his causes together to benefit one another.

In addition to his work with domestic violence victims and the poor, Quin devotes his time to helping children whose lives have been affected by cancer via the Scoring for Good program.

The program benefits Camp Kesem, a camp community founded on behalf of children who have a parent with cancer. The program brings professional athletes to the various camp sites to speak and interact with the children. In the past, Quin has worked with children who suffer from the disease, but his work with Camp Kesem is unique.

“In this situation the parents are dealing with cancer,” Quin explained. “You have the kids whose parents aren't at full strength and it takes a huge toll on them.”

Apart from working directly with the Scoring for Good program, Quin is making his own unique impact to Camp Kesem. For every interception he tallies this season, he has pledged to donate $500 to Camp Kesem to bring more children on board. Quin has three picks on the season thus far.

This past week, Quin was re-elected to serve as the Lions’ NFLPA player representative, a position that he was chosen for by his teammates via a vote. It is a role that is earned by achieving the respect and admiration of your peers.

Quin has earned the respect of the Lions locker room for good reason. He is a team leader, a dedicated family man, and is tirelessly committed to his community and the causes that are closest to his heart.

To learn more about Quin and the organizations he represents, please visit the following websites: