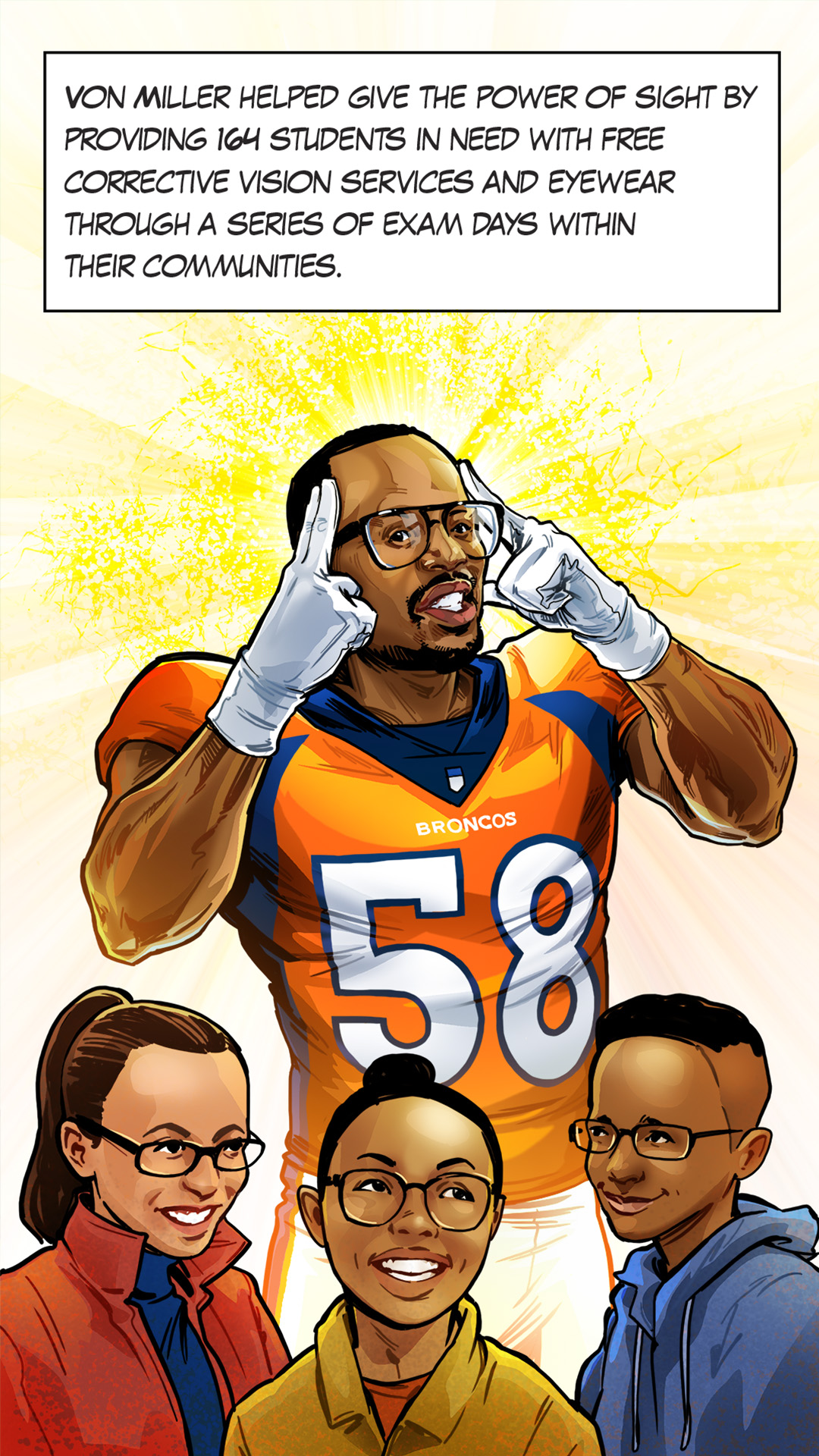 Using their ultra-super powers for good, NFL players around the league have dedicated their lives to protecting their communities and saving the world. When they’re not scoring touchdowns or tackling for loss, NFL players are finding ways to serve their hometowns and team cities – even during the season when time off the field is very limited. Because of this, each week during the regular season, the NFLPA #CommunityMVP program recognizes one player who has demonstrated a commitment to making a positive impact in his community. The weekly Community MVP winners will also become eligible for the NFLPA Alan Page Community (APC) Award, which is the highest honor that the NFLPA can bestow upon a player.​

For being named Community MVP, the NFLPA will make a $10,000 donation to the player's foundation or charity of choice. In addition, our new partner Pledge It will set up a crowdfunding campaign where supporters can pledge donations to the player's cause based on their on-the-field performances during the season.

NOMINATE A PLAYER MAKE YOUR PLEDGE 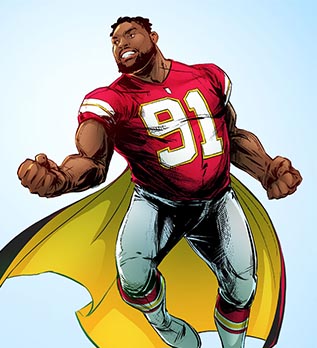 With his communities in need, Derrick Nnadi answered the call, hosting back-to-school events for a victim’s family following the Va. Beach mass shooting as well as 20 kids in Southeast Virginia and Kansas City. 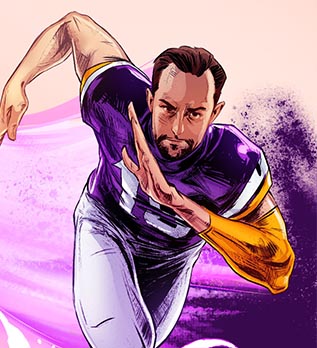 Adam Thielen came to the rescue for at-risk student athletes at Brooklyn Center High School, starting a fall education achievement program that rewards academic success with up to $50,000 in athletic resources. 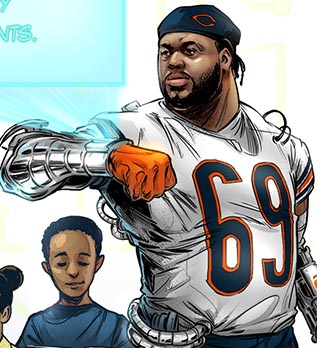 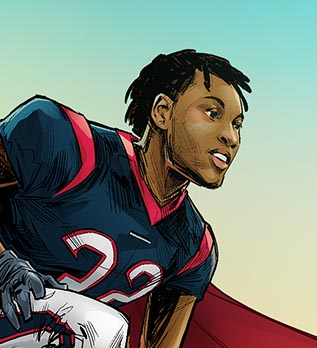 Houston Texans rookie Lonnie Johnson stepped up as a hometown hero, paying for the funeral of a teenager who tragically drowned in Gary, Indiana. 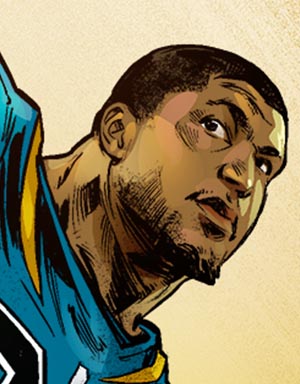 This force on the football field has never forgotten the people who molded him. Calais Campbell donated $20,000 to four organizations that will benefit domestic violence victims and youth in his hometown of Denver. 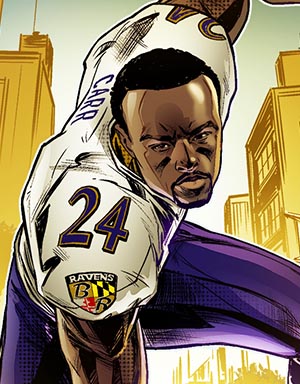 In honor of his own hero – his mom – Brandon Carr is fighting to save lives by donating $12,500 every game this season to fund free screenings through the National Breast Cancer Foundation. 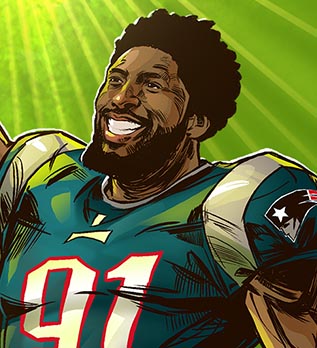 Deatrich Wise Jr. shined his bright light on the city of Boston, throwing a free block party for 500 people at the Boys & Girls Club’s Mattapan Teen Center and pledging to donate $10,000 back to the community. 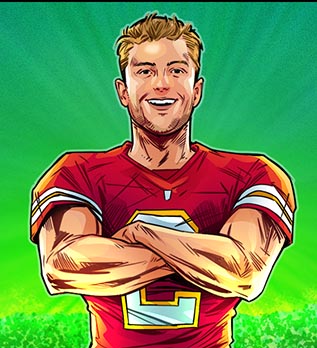 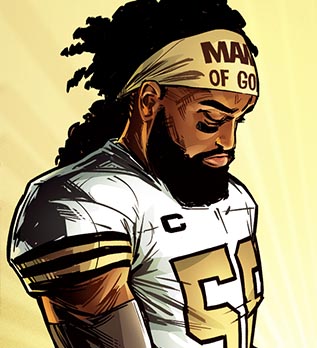 After being fined by the NFL for wearing a Man of God headband, Demario Davis demonstrated the power of giving by raising more than $200,000 to benefit St. Dominic Hospital in Mississippi through sales of the headband. 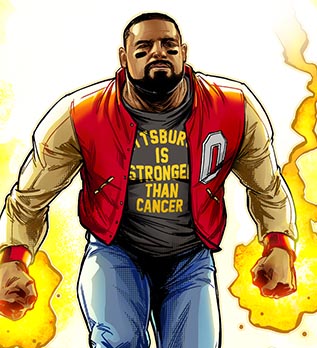 Cameron Heyward raised $200,000 at his Heyward House Homecoming to provide: birthday parties for less fortunate kids; healthy food for underprivileged students on weekends; aid for cancer research & treatment; and access to formal attire for young men who can’t afford it. 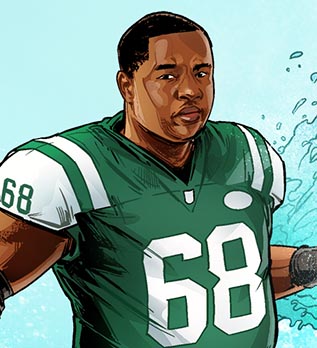 Kelvin Beachum showed why he’s a real MVP, donating $10,000 to United Way of Greater Newark and setting up a Jets gameday campaign that generated 26,000 bottles of clean water for residents in need – most of which he personally delivered. 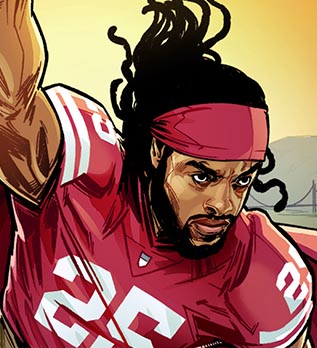 When there’s a need in his community, Richard Sherman springs into action. After seeing their posts for help on social media, Richard donated $5,000 so that a Compton youth football team could attend the national championship and restocked the shelves at three food banks in Washington. 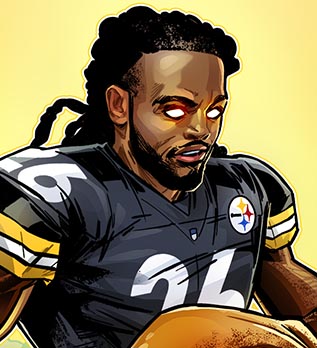 Mark Barron put on for his city for the fourth straight year, distributing 1,500 free turkeys for families to enjoy at Thanksgiving in his home state of Alabama.

While packing up Thanksgiving meals at a local grocery store that would be delivered to homeless families in Seattle, Bobby Wagner spontaneously decided to also pick up the tab for all the shoppers on site. 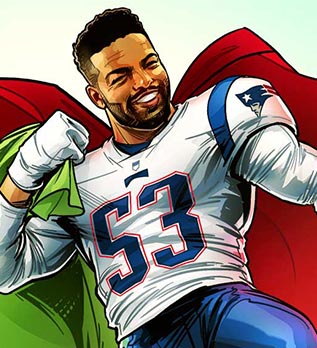 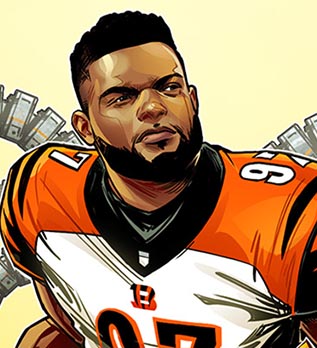 Geno Atkins blessed more than 350 people in need through his Atkins Week of Giving - a seven-day campaign that featured holiday gifts, a party at a local children's hospital, free dental care for the homeless, donations and a car giveaway. 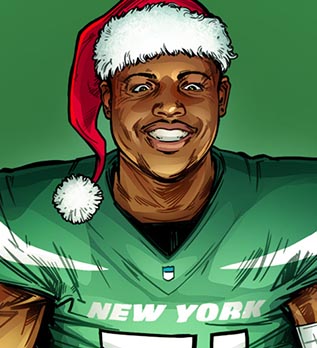 Brandon Copeland and his superhero friends across the league teamed up to host seven holiday shopping sprees that helped more than 300 underserved kids. 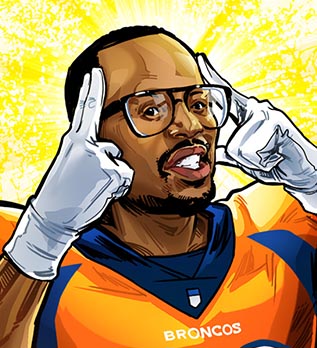 Von Miller helped give the power of sight by providing 164 students in need with free corrective vision services and eyewear through a series of exam days within their communities. 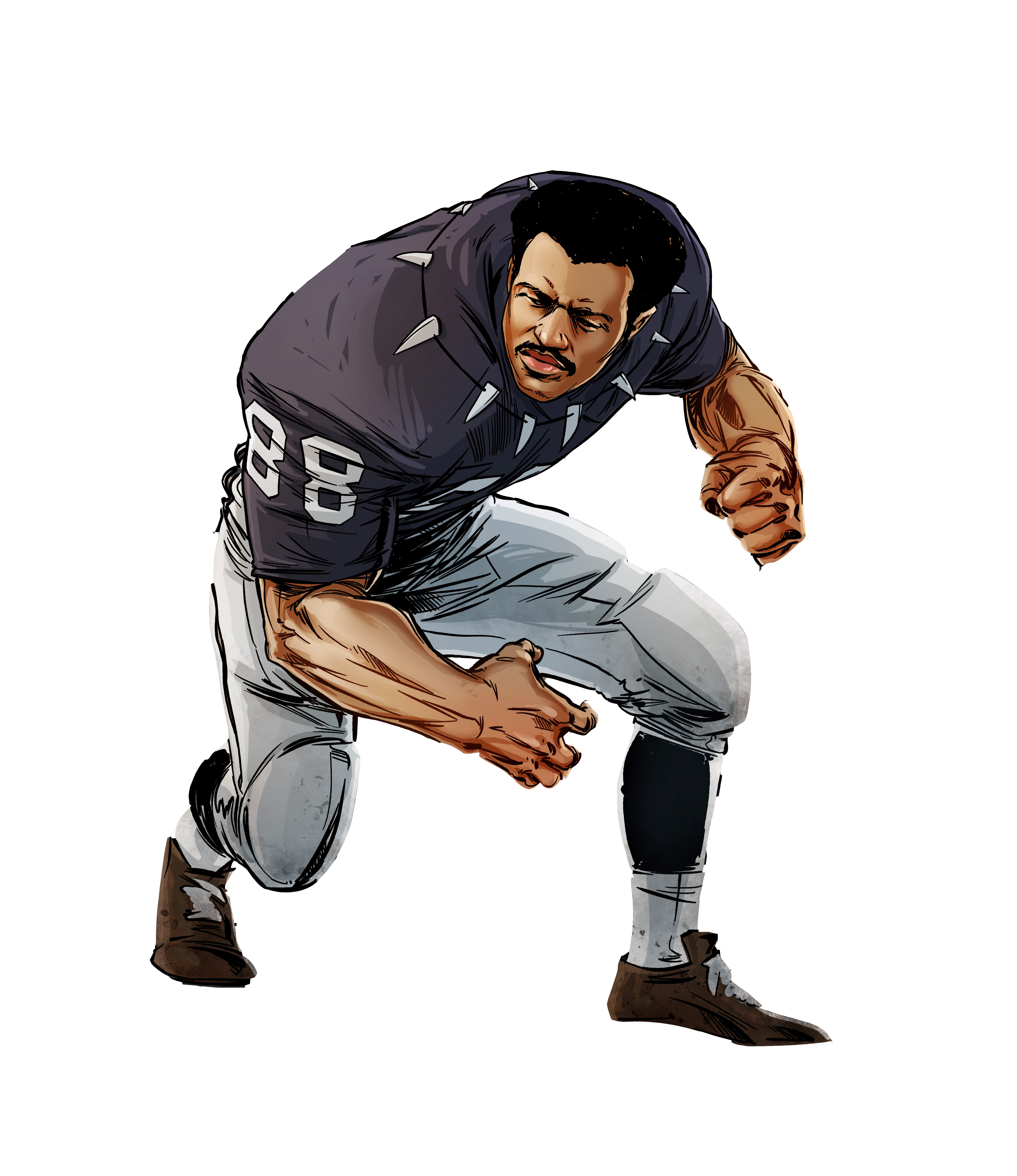 On the field, Page was an unstoppable force, swallowing up quarterbacks and opponents in his hulking grip as part of the Minnesota Vikings' defensive line - better known as the "Purple People Eaters." Possessing an endurance that was out of this world, the All-Pro lineman played in 218 consecutive games and, in 1971, became the first player to win both the Defensive Player of the Year and Most Valuable Player awards in the same season. Along the way, he was never afraid to fight for justice in the league. As an NFLPA player rep (1970-74, 76-77) and member of the union’s Executive Committee (1972-75), Page ensured that player rights were protected and advanced.

Gridiron great by day and legal scholar by night, Page earned his law degree from the University of Minnesota Law School and worked at a law firm while still playing in the NFL. After hanging up his cleats in 1981, he soared up the legal ladder until becoming the first African-American elected to the Minnesota Supreme Court, where he served from 1992 to 2015.

Although he’s retired from football and the bench, Page is still fighting for good. Through The Page Education Foundation, which was founded by him and his late wife Diane, minority students are provided with financial and mentoring assistance in exchange for the students’ commitment to engage in community volunteer work.

The Robin to your Batman. The Pumbaa to your Timon. You couldn't do the great work you do in your community without a supporting cast. These are your presenting partners.

Each week during the regular season, we will recognize one active NFL player who has demonstrated a commitment to making a positive impact in his community. For being named Community MVP, the NFLPA will make a $10,000 donation to the player's foundation or charity of choice. In addition, our new partner Pledge It will set up a crowdfunding campaign where supporters can pledge donations to the player's cause based on their on-the-field performances during the season. The weekly Community MVP winners will also become eligible for the annual Alan Page Community Award, which is the highest honor that the NFLPA can bestow upon a player.

Community MVPs will be selected by a committee of NFLPA staff. Community MVPs will be announced on Friday of each week in order to gain maximum promotional exposure. Each week’s runner-ups will be recognized by name and with a photo and description of their charity work on the following Tuesday in a social media post. Once a player has been named Community MVP, he is not eligible to win again during the same season. Players will vary by positions and by NFL teams.

Players must meet the following criteria to be considered for Community MVP: Charitable/community initiative is organized and led by an individual player and/or his foundation (not an NFL team or sponsor-led initiative). Player should be active with a specific cause or through his foundation. The community/charitable initiative should have taken place within the one-week period (Thursday of the preceding week to Wednesday of the current week) before the Community MVP is announced. Player should have participated in recent community work or held other recent events. From the pool of weekly Community MVPs, a distinguished panel of judges will choose five finalists for the Alan Page Community Award, each of whom will receive an additional $10,000. From those five finalists, the active player membership will vote for the APC Award winner, who will receive $100,000 for his foundation or charity of choice.